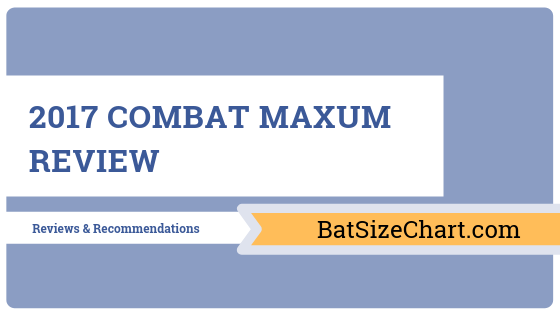 Rumor has it that the 2018 Combat Maxum’s will be made by Easton and only sold on Justbats.com. We are not sure if that is true, but in the mean time, the best prices on Combat Maxums bats from 2016 and 2017 is on eBay. Many used bats can be found for a song and, if the price is right, we would highly recommend it.

The 2017 Combat Maxum Is Recommended For Those Who Fit At Least One Of The Following Criteria:

A Few Recommendations Regarding Purchasing The 2017 Combat Maxum If The Above Criteria Was Met:

The Construction Of The Combat Maxum:​

Combat has a long standing of working on the perfection of the one-piece composite baseball bat while combining it with an extremely light-weight swing, or, MOI. The theory of the design of this bat was meant to amplify the power that directly impacts the ball and then carries on through for the perfect composite baseball bat for practice as well. Combat is ahead of the game when it comes to this theory as well. Combat has gone above and beyond what any other company has done in trying to match this theory. The 2017 Combat Maxum is just the latest quest for Combat. This one-piece, composite baseball bat was created with the biggest barrel available on the market from any company.

A few years ago, (three or four years ago), there was a question regarding the durability of the Maxum. The 2017 Maxum has upped the technology factor and has created a new equation to assist in the bat being much more durable and reliable. The company is standing behind its product by offering a exclusive industry, one-time replacement, five hundred day warranty.

​The 2017 Combat Maxum comes in all the sizes that the 2016 model had with one extra size added in. The baseball bats will be color coded for noticing easier which bat is which size. Below are the sizes that are now available for the 2017 model.

This can be a personal choice, however, some believe that no comparable baseball bats exist. I, however, feel there are some terrific baseball bats on the market and are comparable to the 2017 Maxum. Granted, there are no bats on the market that match all the features of the Maxum, such as the huge, one-piece composite baseball bat with all the varying sizes; along with the super light-weight to match the weight of the swing. There is no other company out there that gives this type of one-piece composite baseball bat.

This doesn’t mean that Combat is all alone out there. Other companies have designs that are similar in ways but just don’t have all the sizes that Combat has to offer. A couple examples of this would be the Dirty South Swag Bat and the Dirty South War Bat. These bats are created to be “like” the Combat Maxum. They may not have all the same sizes available, however, they are still in the running. Another in the one-piece composite baseball bat manufacturing would be the Louisville Slugger Catalyst. It is important to remember that the Slugger does not have the large barrel as does the Maxum.