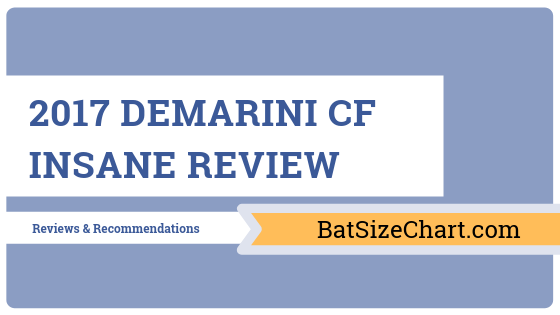 The “CF Insane” tends to work the best and give the highest grade of performance to the more advanced hitter who is stronger. This bat was created from DeMarini’s expertise and years of hard work in creating a composite bat made of two-pieces. Due to their advance experience, the “CF Insane” is a two-piece, composite baseball bat. This bat has a buttery feel; even more so than the last couple of years have been. This also includes bats manufactured by other companies as well. Any hitter who is considered advanced at hitting or what is called a “big hitter” who doesn’t have issues with the speed of their bat and have a preference for smooth, calm bat swings – even during a miss-hit, will automatically fall head over heels for the DeMarini’s CF Insane Baseball Bat.

Where to buy the DeMarini CF Insane?

Lots of companies offer the DeMarini Insane, but our research showed that this older model bat can be found on eBay for the best price. If you want a confirmed warranty make sure you confirm with the eBay seller that they offer a real receipt.

DeMarini is fairly new to the scene of end-loaded, composite, two-piece baseball bats. The release of the 2017 DeMarini CF Insane came as a shock to a lot of people (click here to see Best BBCOR Bats of 2017). This end-loaded baseball bat is created around the same specifications as the 2016 DeMarini CF8.

Due to the high-technology that is in play in creating the CF Insane, there is only one other baseball bat on the market today that stands tall next to it. The Easton MAKO XL sits quite equal and proud beside the CF Insane. Both are top of the line baseball bats and both are by seasoned, reputable companies that have been around the block many times and definitely know what they are doing when it comes to manufacturing the best baseball bats possible. Both of these companies have experience with the composite, two-piece bats; which experience is something you definitely want on your side when purchasing an item such as sporting equipment. The CF Insane and the Easton MAKO XL both have the highest peak performance available at varying pitch speeds as well as along the barrel length.

Both of these professional-grade bats are amazing and boast that theirs is the best. Truth be told, both are equipped with a smooth composite barrel and huge sweet spots. As I said, they both will boast about which is better but in my opinion, you can’t go wrong either way. It would come down to a personal choice for which is best for you and your game. Easton lays claim that theirs has a bigger barrel while DeMarini lay claim that theirs allows for more production along the barrel length. In all actuality, neither outranks the other in high-performance. The only modification that I believe makes the CF Insane a bit above the Easton MAKO XL is the fact that you are able to do bat customization, which is not the case on the Easton MAKO XL.

The 2018 DeMarini CF Insane BBCOR is a high quality baseball bat built for players looking for speed and superior handling at the field. The bat is made from 2-piece composites constructed with a top grade composite barrel and handle.

These two parts are joined together with an attachment piece known as the 3 Fusion, which is probably the most impressive feature of this year’s series of bats. 3 Fusion has removed excessive weight from the connective unit, thus allowing you to have better control of the equipment.

Furthermore, the bat’s point of balance is found lower down the barrel and this provides more power at contact compared to other brands, assuming that the swing weight remains constant while playing.

The BBCOR’s streamlined body allows you to make transitions smoothly without putting too much effort.

It’s a BBCOR certified bat meaning it can be used in Highschool and Collegiate Play.

Equipped with Paraflex barrel material which makes it feel lighter than it actually is.

This brand new feature aims to remove vibrations and ball sting when you make awkward swings with your bat. Sometimes taking a bad shot can be painful, especially for those who are new to baseball and aren’t used to such encounters. The 3Fusion Handle will prevent you from hurting your back and hands unnecessarily; even contact on the bat’s lower end won’t cause any sting.

Apart from reduced stinging and vibrations, the handle has also been built to be more rigid than usual. This allows for minimal flex when swinging which is great for power hitters seeking to take their best swings yard.

The bat contains tremendous power coming from the barrel and handle, it has more load at the barrel’s end which is of great advantage for mashers. Nonetheless, despite all the extra features found in it, Demarini has still made the bat to be considerably lighter to swing thus making it suitable for contact-hitters as well. As the manufacturers say, it provides you a great balance of speed and power.

This material allows you to enjoy tremendous hitting performance right after purchasing your 2018 DeMarini CF Insane BBCOR from the store, you don’t have to break it in before use like other baseball bats. In other words, you can take it right from the shelf to your upcoming game without doing any prior adjustments.

Moreover, the barrel on Insane BBCOR has slightly been extended from the previous model, so as to give you a longer focus point or sweet spot for making ball contact more often.

As for player type, it’s an endloaded bat that normally does well for power hitters. However, the bat still has sufficient balance as to find a home in contact hitter’s hands too. Those looking for a little bit extra power with sufficient end load will find it quite appropriate.

Who is it meant for?

The 2018 DeMarini CF Insane Endlaoded BBCOR is one of the most advanced baseball bats the company has ever created for younger players. Though it can be used by any player interested in a good bat, it’s usually reserved for competitive players at high school or much older levels.

According to the manufacturers, 2018 CF Insane BBCOR is an end loaded composite stick in their collection. The bat is perfect for you if you’re in need of speed through the field zone, or skipping into the BBCOR game. It will help you upgrade your game and performance instantly.

The 2018 DeMarini BBCOR is an advanced baseball bat that continues on the great legacy of superior quality already paved by its predecessors. A lot of technology went into creating this model so that it can be suitable for use by its target group, mainly consisting of competitive high school and college baseball players.

One of its most significant features is the connective piece which eliminates vibration from the handlebar, and also stinging. This ultimately gives you greater confidence and feel at the pitch. Furthermore, the 2018 DeMarini BBCOR has a less bulky construction compared to its competitors, which allows for more accurate dial in swing-weight throughout the bat. This product will make a great tool for players interested in upgrading their game.