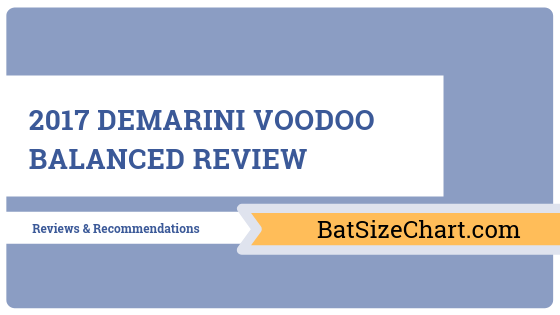 Any serious baseball player knows the name DeMarini’s Voodoo. The DeMarini’s “Voodoo” baseball bat line is considered to be one of the best equipment available on the market. The 2017 DeMarini Voodoo Balanced baseball bat line is for the serious athlete that has a lot of potential (click here to see Best BBCOR Bats of 2017). The “Voodoo” bat line has been a top runner in the two-piece hybrid bat game; from professional athletes to semi-pro players to the above average league player.

Even though most individuals who play ball know this line’s name, the line is not made for your average everyday league player in mind. DeMarini Voodoo baseball bats are created for the strongest players on the team (check out top BBCOR Bats here).

Where to buy the 2017 Voodoo Balanced?

Since this bat is now no longer price protected by manufacturers, the best price is usually found on eBay. I found a few real cheap options new in wrapper and a couple used ones that you could get for just about shipping prices.

The 2017 DeMarini Voodoo Balanced Is Suggested For Use By The Following:

As I mentioned above, the 2017 DeMarini Voodoo Balance is made for the strongest players around, therefore, just because this line of bats is top of the line, doesn’t necessarily mean it is meant for every player. Even the player that can afford this line of bats but isn’t the strongest player should find something that will fit their needs much better. DeMarini manufactures quite a few other baseball bats that would probably be a better fit in the long run and help you to make the most of your game.

The 2017 DeMarini Voodoo Balanced Is NOT Suggested For Use By The Following:

I know that most likely the parent in the house will be running out to purchase the baseball bat that is required and begged for. This includes, people like me, who don’t know anything about baseball. This is one reason that the color coding helps a lot. Just make sure that you are careful and not pick up the similar color coded bats that are available on the market.