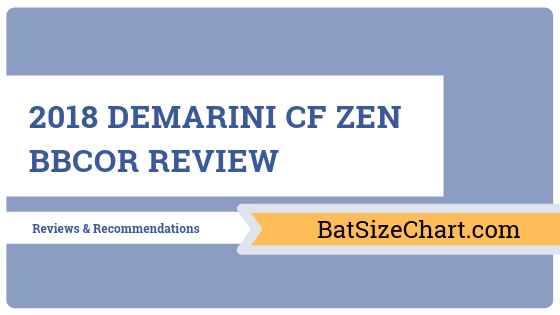 The 2018 DeMarini CF Zen in BBCOR is a monster bat. I love the smash on hits and mishits alike. The two piece design and the new 3 fusion handle are well made. It is no suprise this is DeMarini’s most expensive bat.

the marketplace for as long as I can remember. I know a good bat when I see one, and I can almost always feel the strength of the grip of any of the bats out there. That, plus a ton of research on these little gems  makes me a real baseball bat connoisseur. This piece is going to be a review of the 2018 DeMarini CF Zen in BBCOR, and you are going to love it.

See all our BBCOR Bat Reviews

This is the kind of bat you want to go for if you are a contact hitter. The reason for this is that it has a balance of weight and power and therefore allows a very even grip. While the bat is
most ideal in the hands of a contact hitter, it still has enough power in it to accommodate the whims of a power hitter. However, if you are looking for a little more of an end load, then the advice would be to look elsewhere. The 2018 CF Zen is made for competitive players from high school all the way to the highest ranked professional leagues.

With this model, DeMarini has used its popular ParaFlex material to build the barrel. This material makes for a good swing and power. In addition to that, it is sturdy and won’t break midway through practice. The long barrel gives you an opportunity to add power to your swing and connect with the ball more often, which makes for plenty of power shots.

In addition to a good, balanced design with a good grip, the Zen also comes with a new feature, the 3Fusion handle that works towards eliminating sting and vibrations when the hitter makes an unbalanced swing. Less sting means a higher level of accuracy and hence better performance. The handle is quite rigid, and this provides some good flex, especially when in the hands of a power hitter.

The 2017 model of the Zen didn’t come with the 3Fusion handle, and that was a real problem because it used to sort of spin out of form and ruin what would otherwise be some very good swings. The lack of this type of handle did little to help with problems related to sting and vibration, and while it was a good bat by any standards, it couldn’t scale the dizzying heights of performance the 2018 version is capable of. The new bat also comes with a longer barrel, and any hitter will tell you what kind of contact that provision makes for.

For DeMarini, high performance bats have always been part of the job description, and this bat is an upgrade of most of those varieties. CF Zen has some similarities with its predecessors such CF7, CF8 and CF9. Sure , a good number of things have changed, such as the level of precision expected as well as the materials used to make the various components. However, the operation technique has not changed much, and there is a consistent focus on ease of use and tact.

CF Zen’s sister version for 2018, the CF Insane, is also a lot like others in its pool but has a modified end load, making it ideal for power hitters.

eBay and Amazon seem to be the places to look if this is the bat you have set your eyes on. At the moment, Amazon is offering it at up to about $449.95 on the high end and seems to be shipping the product for free around the world. eBay is selling the bat at the same price but then slapping you with
a $50+ shipping fee, so amazon is definitely the better deal at the moment.