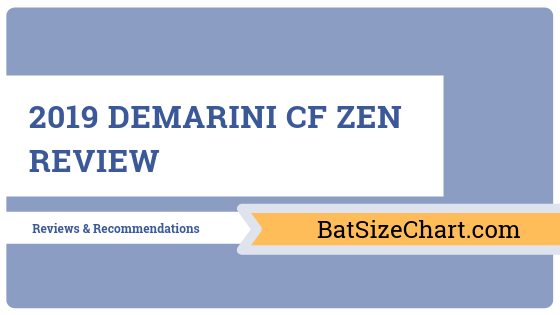 As always, the best place to look for great deals on a baseball bat is on eBay. There are a few good options with a search like this. Of course you can check your regular bat haunts as well because this bat will be available just about everywhere. Look at DeMarini’s Baseball Bat site too.

Any serious bat consumer knows that the CF Zen line has struggle mightily with its durability over the years. The 2016 CF Zen big barrel was ultra hot but almost guaranteed to break. The 2018 version was deemed illegal because it was crazy hot (and also broke). It was recalled and revamped with a ring inside the barrel. Then, in 2018 came out a repainted 2017 version (with the same ring) but STILL had issues breaking. It was also deemed illegal.

Early reports on the 2019 CF Zen are not promising in terms of its durability. Specifically, the big barrel versions of the bat in the drop 10 look like they are going the way of the 2016, 2017 and 2018 CF Zens. Many have broke—and people are making it known online. HOWEVER, until they break, the bats are flat out HOT.

The BBCOR versions of the CF Zen from 2016 to 2019 have not changed much. They did change from a D-Fusion handle in 2016 to a 3-Fusion in 2019. (This is in reference to the handle). Otherwise, the swing weight has stayed about the same and the barrel size is about the same too.

A USA version of the CF Zen was late to the party in the 2018. But, when it finally did come out it looked and felt great. The 2019 version of the USA Zen doesn’t expect to change much from the 2018 version. All reports are it is the same bat but with some upgraded graphics.

In every league and association, the 2019 DeMarini CF Zen is for the high level player that likes a great feel on contact and light swing. The only people who do not buy the bat fall into two categories:

Otherwise, the bat is a monster. Go to any little league game (especially USSSA/Big Barrel) and you’ll see the CF Zen is swung by the best kids on the best teams. Occassioanlly a bat like the CAT 8 creeps in, but mostly the CF Zen in its heavier drops.

Concerning the durability, we’d recommend steering towards the drop 8 or 5 as to give yourself as much life as possible in the bat. But, even if you are a drop 10 swinger, if you are up for potentially dealing with a warranty and play a lot of baseball games then the 2019 DeMarini CF Zen will be a bomb maker.