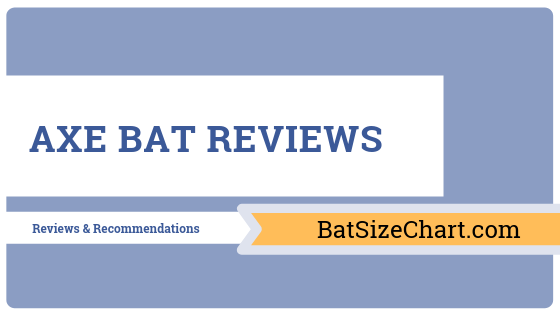 Axe Bat Reviews are all over the internet. Mostly because they have made so many different iterations of the bat since their inception in 2014 (or thereabouts). But, also, because enough people have liked the bats to get them on the short list of many serious players.

You can read about our specific takes on individual bats on our BBCOR bats page. This serves as our general Axe Bat Review page.

Where to Buy Axe Bats

Axe has decent distribution, especially online. You can find their bats at most major online retailers. Of course, the favorite place to check is on eBay. Finding used models for great prices and last year’s models for clear out prices is common place. Axe’s website is also a legit place to find deals and options.

Axe bats, although more common now then they were in 2014, still bewilder some hitters. The idea of a bat that only makes contact on one side, has an odd shaped handle and a weird end cap is not intuitive. But, after much research, we find that any Axe Bat Review must discuss three items. They are, in no particular order, the asymmetric handle, the asymmetric knob and a one sided hitting.

The most obvious feature of an Axe bat is one the one that proves the bat’s name brand. Axe bats come with an axe shaped handle. The handle gives you a more ergonomic feel.

Axe has more than one study “proving” bat speed is indeed faster with an ergonomic handle. These studies have all been funded by Axe so its hard to say they were unbiased. But, the idea of a faster swing because of an oval knob makes sesnse to at least a few folks who know what they are talking about. Take, for example, Dustin Pedroria..

Another piece to think through on the Axe Bat is that if you always hold the handle the same then you will always hit the ball on the same side of the barrel. In some respects this is just like a wood bat. Wood has a stronger side, naturally. Players speak about this as the face grain and make sure they make contact with the barrel side up.

Axe Bats, although metal or composite, are built with a stronger side in mind. They use the predictability of the impact to design a barrel that is more durable and focused performance.

The final piece of the equation, which Axe added just a few years ago, is the use of an asymmetric end cap. Since the bat only has one sided hitting because of the asymmetric knob then  the backside of the barrel doesn’t need to be as long. So, Axe shaves off some of the end cap on the backside. (Really, they just design it such that it scopes down towards the barrel. This feature, in turn, removes mass from the end of the barrel and lowers swing weight.

In the beginning Axe only made a BBCOR bat. That was, they only had a highschool/NCCA approved bat. That was just a few short years ago.

Now, Axe has a bat at every level of the sport.

Wood: they not only make their own wood bats for the amateur level, but also license their oval knob to a few companies like Victus, Chandler and more.

BBCOR: They make a number of different types of highschool approved bats. The Avenge, Origin and Elite are thier most popular.

USSSA: Axe Bats also makes a few big barrel versions of the bats. Expect to see an Avenge, Elite and Origin too.

USA/Youth: In 2018 Axe made an Elite in USA. Expect to see that expanded to an Avenge as well is the 2019 USA Bat lineup.