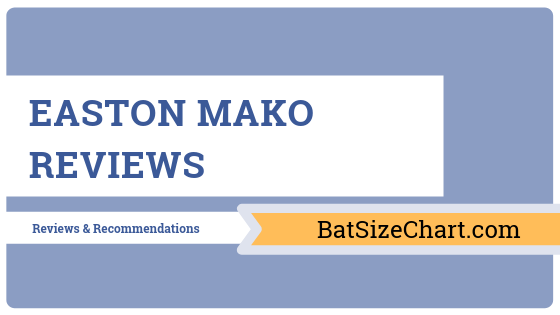 We have spent considerable time with the Easton MAKO line of bats over the years. In fact, since the Mako’s original release in 2014 we have ever single make bat on the market. That includes the famed 2014 orange version as well as the most reason Easton MAKO Beast. No bat, dare we say, has had more impact on the industry at large then the Easton Mako. It has consistently ranked on the top of many best youth baseball bats lists. Here we review each of the Easton Mako bats and detail their progression over the years. This serves a true Easton Mako review.

The 2017 Easton MAKO beast is the culmination of 4 years of R&D in the MAKO. The barrel is larger than ever. The swing weight is a bit heavier than the 2016 versions. But, still, it is a two piece composite bat built with a balanced swing weight and the ability to absolutely rake balls. Few players who use the Beast ever go to anything else.

The MAKO Beast comes in a number of sizes and model types. At the top of the popularity list is the BBCOR model. We discuss this more in our most popular bats article.  Then follows the 2 1/4 Little League bats that are the top of their class. Next is the large grouping of senior league and big barrel bats that range from a 2 5/8 drop 5 to a 2 3/4 drop 12. The Easton Beast really does offer a bat type for every hitter.

One complaint that many get when deciding on the Easton Mako is its price point. Never has the Mako been considered inexpensive and rarely can you find one on a closeout type deal where the prices are exciting for the consumer. Instead, almost always, it takes some effort to convince yourself to pull the trigger. But, year after year and season after season people keep coming back.

Although no distributor or outlet is selling the 2017 MAKO Torq, you can still find them directly on Easton’s site. These 2017 TORQs are, as far as we can tell, left overs from previous years that went unsold. With such a massive inventory, Easton has repainted these bats and is now selling them on their site. We would guess this may very well be the last year of the Mako Torq.

On the whole, the bat’s barrel and performance are top shelf stuff. But, the spinning handle has struggled to find any real uptake among serious players. It is still considered a gimick by most. We are fans of the bat and the idea, but we are well in the minority here.

The 2017 Easton MAKO Torq is a two piece composite built on the same chassis as the Easton MAKO Beast. It comes in the full breadth of sizes the Beast does too. If you were to tape down the handle, and not allow it to spin, then the TORQ and the Beast would be identical bats.

The most popular of the 2016 line of bats, the Easton MAKO is considered by many the best MAKO ever. The swing weight is lighter than any version before or since. Although the barrel is smaller than the Beast, the 2016 Easton Mako deserves all the credit in the world for producing one of the lightest swinging bats with the one of the largest barrels. Few have anything to say but great things about the 2016 Mako.

You could find a 2016 Easton MAKO in just about any size imaginable. The most popular version was the BBCOR version. But, like clockwork for Easton, the Youth 2 1/4 barrel was, during the 2016 season, wildly popular. And, of course, the drop 5, drop 8 and drop 10 senior barrel bats were one of the most popular bats in that niche too. There really is not a bad thing we can think of to say about the 2016 MAKO. It is for hitters that love a two piece composite and would like a light swinging bat.

The 2016 TORQ bats are left overs that did not sell from the 2015 line. Infact, they still have so many 2016 TORQs that they bled into the 2017 year as well. To put it nicely, the Easton TORQ was a colossal failure in terms of market acceptance. From a pure clinical standpoint, the TORQ is a good to great bat with a fantastic barrel and a massive sweet spot. The swing weight is right where folks want it. But, in the end, the spinning handle, and the premium price for the spinning handle, was too much to handle for parents and players. This bat, and the 2015 version, may go down as the biggest bat flop in history.

Easton expanded the 2015 line of MAKO bats by adding an XL Version. The XL, as you might guess, is a more endloaded version of the MAKO. As Easton lowered the swing weight of the MAKO from the 2015 version, they felt obligated to still ad an iteration for the hitter that liked a two piece composite but still wanted some oomph. The bat was only offered in BBCOR and left those big hitting 14U players out in the cold.

We are big fans of the 2017 Easton MAKO XL. For those that like a little more end load but still want that smooth smash of a two piece composite bat then this bad boy is money. Although not the most ubiquitous bat in terms of market demand, the people this bat served it served very well.

The second year of the Easton MAKO was outstanding. Although there were no significant upgrades from the 2014 version of the bat the word was out. The MAKO was the king of the hill, especially in the Youth barrel space, and no one came close to catching them. Easton offered the 2015 Mako in a number of iterations including the very famous BBCOR, lights out big barrels and market dominating 2 1/4 barrel youth bats.

Also in 2015, Easton released the bat that would get more publicity than any other bat ever has. The 2015 Easton MAKO Torq used a spinning bottom hand handle. The idea was to increase bat speed by allowing a hitters hands to rotate more quickly through the hitting zone. As hands could move independent of each other, at least in theory, inside pitches could be more easily raked.

In nice terms, the bat was an utter failure in the market. We contend it had less to do with the technology then it did with the price point. Easton had previously pushed the envelope with the most expensive bat in the 2014 MAKO, and then added another $50 to the MAKO TORQ. Parents, already reeling from sticker shock on the MAKO dry heaved at the price of the TORQ. It turned into a rich bat for a kid that didn’t have anything else going for him and, in the end, sales were abysmal. In fact, sales were so bad that Easton still sells this very bat in 2017. These are not newly produced bats but, rather, repainted bats from this very season.

Easton’s MAKO TORQ for 2015 was released in every size imagainable including a 2 5/8 drop 8 and drop 10 as well as the dominate youth barrel and BBCOR sizes. Today you can find these bats, still highly discounted. They are, in large measure, the same bat as MAKO but at a serious discount. If you are willing to tape down the handle then you could get a MAKO at a very cheap price.

Ahhh, the bat that started it all. After composite bats were banned universally across baseball leagues a new standard of BPF 1.15 was implemented. Easton was so far ahead of the curve on producing a monster 1.15 BPF bat that few others in the space were even in the same category. The word got out quick that the MAKO was the bat of all bats. From what we have been told, the 2014 Easton MAKO was the best selling baseball bat of all time. Vendors could not keep them on the shelves. Even today the bat drives a premium price.

The 2014 MAKO came in a lot of sizes too. The BBCOR and Senior League 2 5/8 bats were impressive. But the 2 1/4 youth little league bat may have been the most dominant bat in any category of baseball since Slugger dominated the wood and pro market in the early 1900’s.