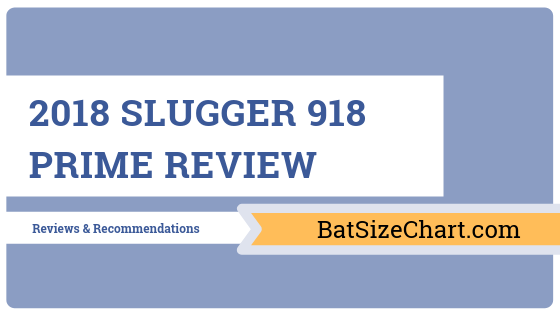 Louisville Slugger will release a 2018 two piece composite bat called the 918 Prime. The bat uses the same connective TRU3 technology as it did in previous years, but now ends a new end cap and a new composite for a bigger barrel and a lighter swing. It will be priced out at $399. But, I always like to look at ebay pricing before anywhere else.

The 918 Prime will be Slugger’s most robust baseball bat. Meaning, the bat will come in the most sizes of any of the 4 major performance bats Slugger will produce for 2018. You can expect a BBCOR, USABat as well as several big barrel bats in the drop 5, drop 8, drop 10 and drop 12 range. What the drops will be in the USABat bat range have yet to be seen.

Although there are some structural changes to the 918 Prime, when compared to the 917 Prime from 2017, the bat will still be intended for the same audience. More specifically, the following characteristics are the type of person that will like the 918 Prime.

If the 917 struggled in any particilar category it was the durability. There were more than a couple of reports that the connective piece between the handle and barrel would become loose. And, upon hitting the bat, you could feel the barrel spin away from the barrel.

No one denies the 918 Prime is a beautifully performing baseball bat. In particular, many BBCOR hitters love the use of a 918 at high levels of highschool and collegiate play. Although the barrel could have been bigger in the 917 Prime, the 918 solves at least a few of those issues with the new end cap, new composite and ultimately bigger barrel.

The 918 Prime gets almost perfect marks on the 918. The bat is Slugger’s marquee bat. It comes in a BBCOR, USAbat and then several Big Barrel sizes. We would love to see a drop 10 in a 2 3/4 too. And the fact it only has one size in a USAbat keep it from getting the perfect score.

Although still very early in the season, early reports show the 918 prime as a very user friendly bat. It is a smooth swing even on the most violent smashes. Every hit will feel like a home run as the two piece composite makes them all feel great. And, a hit right in the sweet spot with some good bat speed should make that ball sail.

There is no doubt that the 2018 Louisville Slugger 918 Prime will be a marquee bat in the baseball space this year. The BBCOR bat should be the most popular with the big barrel and senior bats not far behind. The jury is still out on the USAbat PRIME 918.

Since this blog covers bats before just about anyone else, there is not a lot of information on the 918 prime available to date. We always suggest you check on Slugger’s site directly. Otherwise, check back here often for updates. Our overall BBCOR bat reviews page is super helpful in your search for a great baseball bat.