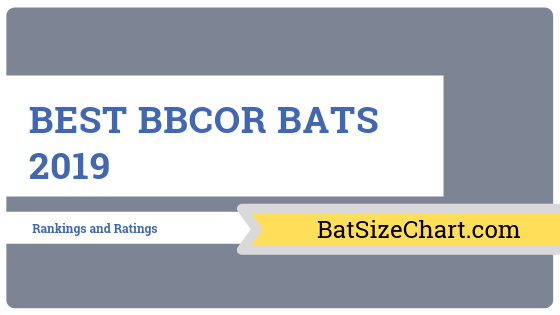 Bat sizing, swing type and player skill level (to say nothing of budget) are huge factors in determining the best bbcor bat for you. Any given player’s best fit could be different than another. This is why our BBCOR bat size chart comes in handy.

The long answer is it depends. The short answer is that we like the 2019 Louisville Slugger Meta. Those looking for a big barrel, great feel and balanced swing will like this bat. But, it’s expensive. So, if you want to save several hundred bucks then the best bat for 2019 is a 2018 or 2017 CF Zen or Marucci CAT 7.

The 2019 Class of BBCOR bats brings with it a number of bats worth considering. As we state above, we really like the Meta Prime. But, there are several others that rank really well.

Slugger continues to produce a two piece composite bat to be reckoned with. The 919 Louisville Slugger Prime for 2019 class tops out Slugger’s baseball line. The bat changed its connection piece from the Tru3 to the VCX in hopes to improve some durability. But, the BBCOR version of the bat was durable enough. Recommendations and reviews on the Prime 919 follow. Read the full review.

Dirty South Bats is bat company based in Atlanta, Georgia. They have delivered remarkable results from gorilla & grass roots marketing via facebook and other social channels. Many users of the bats swear by them. Others are surprised by their hype when the bats just alright. The positives focus on the bats barrel size and perceived pop, the negatives focus on the fact they are overpriced and ring hands on mishits. Read the full review.

Axe Bat Reviews are all over the internet. Mostly because they have made so many different iterations of the bat since their inception in 2014 (or thereabouts). But, also, because enough people have liked the bats to get them on the short list of many serious players. Read the full review.

There are many types of wood bats and composite bats available on the market, including maple wood bats, ash bats, white ash bats, hickory bats, and composite wood bats. If you are unsure of which quality wooden bat fits your needs, bamboo wood makes a great choice for amateurs and professional major league baseball players alike. Read the full review.

If you are new to playing baseball, looking to buy a baseball bat (check out top BBCOR Bats here) for someone as a gift, or just looking to learn more about the game and equipment, you are bound to hear the name Baum Bat. Read the full review.

There were several fantastic BBCOR bats in 2018. But, the bat that consistently got great ratings across the board for its fantastic feel out of the wrapper, great performance and durability is the 2018 Louisville Slugger 918 Prime.

The bat was a fan favorite. Most liked its Lizard Skin grip and the light swing weight. Of course the bat was not inexpensive, but this is how it goes these days in the BBCOR space.

The 2018 DeMarini CF Insane BBCOR is a high quality baseball bat built for players looking for speed and superior handling at the field. The bat is made from 2-piece composites constructed with a top grade composite barrel and handle. Read the full review.

The 2018 DeMarini CF Zen in BBCOR is a monster bat. I love the smash on hits and mishits alike. The two piece design and the new 3 fusion handle are well made. It is no suprise this is DeMarini’s most expensive bat. Read the full review.

Easton leaves behind the MAKO in 2018 and moves into the Ghost X series of bats. Like the MAKO these are two piece composite bats built with a light swing a big barrel. They will serve the same population of hitters that need/want as much barrel as possible on a smooth swinging stick. I have seen the Easton Ghost X and used it and now I write our 2018 Easton Ghost X Review. Read the full review.

Marucci has made a CAT baseball bat for the last several years. The CAT 5 was the first iteration followed by the CAT 5-squared (after the CAT 5 was made illegal in a few leagues). Then followed the CAT 6 in 2014 and then, now, the CAT 7 in 2017 and 2018. Below discusses our 2018 Marucci CAT 7 Review. Read the full review.

We have spent considerable time with the Easton MAKO line of bats over the years. In fact, since the Mako’s original release in 2014 we have ever single make bat on the market. That includes the famed 2014 orange version as well as the most reason Easton MAKO Beast. No bat, dare we say, has had more impact on the industry at large then the Easton Mako. It has consistently ranked on the top of many best youth baseball bats lists. Here we review each of the Easton Mako bats and detail their progression over the years. This serves a true Easton Mako review. Read the full review.

Louisville Slugger will release a 2018 two piece composite bat called the 918 Prime. The bat uses the same connective TRU3 technology as it did in previous years, but now ends a new end cap and a new composite for a bigger barrel and a lighter swing. It will be priced out at $399. But, I always like to look at ebay pricing before anywhere else. Read the full review.

What is not to love about the 2017 CF Insane? It was the first bat CF type bat to focus on a heavier swing weight. It swung about 10% heavier than the CF Zen versions of the bat. The bat got remarkable ratings, was only in BBCOR and still rakes a lot of dingers even today. Way worth finding, buying, and the hitting balls to the moon with.

The 2017 Easton MAKO Beast Baseball Bat could be the newest, most popular, bestselling baseball bat of the year. Easton continues to create more groundbreaking and more advanced sporting equipment every year. You would be hard-pressed to go to your next baseball practice or baseball game and not spot Easton equipment brought by your team members and your opposing team. Read the full review.

Hybrid construction two-piece bats are gaining more and more prominence because of the performance enhancements that these bring to the table. Unfortunately, such pieces of equipment can be quite costly. Read the full review.

Easton is known for the company’s huge collection of high quality BBCOR bats. Easton Z-Core Speed is one of the newest additions to the family. Apart from being an exceptional BBCOR-certified bat, this is also a limited edition item. Read the full review.

Louisville Slugger is one of the most recognizable names in the world of high quality baseball bats. Of all the brand’s developments, the 917 Prime range is its top performer. The 2017 Louisville Slugger 917 Prime BBCOR bat is not an exception. Read the full review.

While the Rawlings 5150 isn’t the most popular Rawlings BBCOR bat out there (check out top BBCOR Bats here), it does have its fans. This is the main reason why the 2017 edition of Rawlings 5150 builds upon what hitters have come to love and expect from the company Read the full review.

If you are looking for a high quality composite BBCOR bat, the 2017 Rawlings Quatro may be the ideal item for your needs. This bat has been constructed to address the needs of a wide array of baseball players (click here to see Best BBCOR Bats of 2017). Versatile and well-made, Quatro has quickly gained fans since its release in August 2016. Read the full review.

The Rawlings Velo is probably one of the most loved and versatile bats by Rawlings. Recently, the company launched the 2017 edition of its highly successful bat. Several characteristics make the 2017 Velo better than its predecessors. Let’s find out what this BBCOR-certified bat has to offer Read the full review.

I had a chance to hit with and heft the Easton Lock and Load bat. I thought the bat felt good and, frankly, just like the Z-Core Easton bats. Which, it turns out, it is supposed to feel like. I thought the locking mechanism for the end cap was a bit cumbersome although unique and ultimately useful. Read the full review.

Easton makes a great line of inexpnesive BBCOR Bats. We suggest you take a close look at the Easton S400 or S500 if you want to save a few bucks on a new in wrapper bat.

But, if you really want a deal on a cheap BBCOR bat, we suggest you take a stab at eBay pricing in and around October. Bats price out well during those days as demand is so very slow. Another good time to check eBay for a very reasonably priced used bat is in late July to September. Bat vendors usually unload their inventory during these times, driving price down, to make room for next year’s inventory coming in.