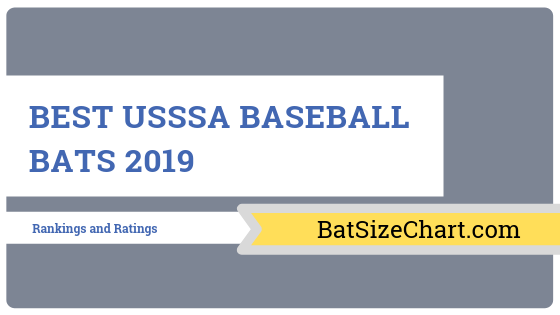 Looking for the best big barrel bats on the market? We take a stab at some of our favorite 2019 USSSA Bats.

There are several great options. But, our favorite is the 2019 DeMarini CF Zen. In fact, just about any CF Zen from 2016 through 2018 is pretty fantastic in the USSSA space. Although not the most durable bat out there it absolutely rakes. And the large size offerings with many drops make it our best USSSA Baseball bat.

We are in love with the 2019 DeMarini CF Zen. But, if you want to try something a bit different with a stiffer feel then check out the 2019 Marucci CAT 8 in a drop 8 or 5. If neither of those bat suit your fancy then you have good options in the Slugger 718 Select as well as Easton’s Ghost X Evolution Line.

Slugger continues to produce a two piece composite bat to be reckoned with. The 919 Louisville Slugger Prime for 2019 class tops out Slugger’s baseball line. The bat changed its connection piece from the Tru3 to the VCX in hopes to improve some durability. But, the BBCOR version of the bat was durable enough. Recommendations and reviews on the Prime 919 follow. Read the full review.

Dirty South Bats is bat company based in Atlanta, Georgia. They have delivered remarkable results from gorilla & grass roots marketing via facebook and other social channels. Many users of the bats swear by them. Others are surprised by their hype when the bats just alright. The positives focus on the bats barrel size and perceived pop, the negatives focus on the fact they are overpriced and ring hands on mishits. Read the full review.

Axe Bat Reviews are all over the internet. Mostly because they have made so many different iterations of the bat since their inception in 2014 (or thereabouts). But, also, because enough people have liked the bats to get them on the short list of many serious players. Read the full review.

The Easton Mako is the clear winner here. For various reasons we’re going to list below:

The 2018 DeMarini CF Zen in BBCOR is a monster bat. I love the smash on hits and mishits alike. The two piece design and the new 3 fusion handle are well made. It is no suprise this is DeMarini’s most expensive bat. Read the full review.

Easton leaves behind the MAKO in 2018 and moves into the Ghost X series of bats. Like the MAKO these are two piece composite bats built with a light swing a big barrel. They will serve the same population of hitters that need/want as much barrel as possible on a smooth swinging stick. I have seen the Easton Ghost X and used it and now I write our 2018 Easton Ghost X Review. Read the full review.

Marucci has made a CAT baseball bat for the last several years. The CAT 5 was the first iteration followed by the CAT 5-squared (after the CAT 5 was made illegal in a few leagues). Then followed the CAT 6 in 2014 and then, now, the CAT 7 in 2017 and 2018. Below discusses our 2018 Marucci CAT 7 Review. Read the full review.

We have spent considerable time with the Easton MAKO line of bats over the years. In fact, since the Mako’s original release in 2014 we have ever single make bat on the market. That includes the famed 2014 orange version as well as the most reason Easton MAKO Beast. No bat, dare we say, has had more impact on the industry at large then the Easton Mako. It has consistently ranked on the top of many best youth baseball bats lists. Here we review each of the Easton Mako bats and detail their progression over the years. This serves a true Easton Mako review. Read the full review.

Here’s what really separates this bat from the Mako XL, the Voodoo Raw and the Prime 916:

However, if you’re a player who enjoys end-loaded bats and feel they give you an edge over the pitcher: go with the Voodoo Raw.

Here’s the best pricing for the CF8:

Most people hear “Adidas” and instantly think of shoes and clothing made of great quality. This is true, however, Adidas is also a top leader in sporting goods for baseball, football, softball, soccer, volleyball, basketball, and various other sports. Adidas supplies a wide variance of shoes, clothing, and sporting goods in a wide array of styles and colors. Read the full review.

The 2017 Easton MAKO Beast Baseball Bat could be the newest, most popular, bestselling baseball bat of the year. Easton continues to create more groundbreaking and more advanced sporting equipment every year. You would be hard-pressed to go to your next baseball practice or baseball game and not spot Easton equipment brought by your team members and your opposing team. Read the full review.

Louisville Slugger is one of the most recognizable names in the world of high quality baseball bats. Of all the brand’s developments, the 917 Prime range is its top performer. The 2017 Louisville Slugger 917 Prime BBCOR bat is not an exception. Read the full review.

While the Rawlings 5150 isn’t the most popular Rawlings BBCOR bat out there (check out top BBCOR Bats here), it does have its fans. This is the main reason why the 2017 edition of Rawlings 5150 builds upon what hitters have come to love and expect from the company Read the full review.

If you are looking for a high quality composite BBCOR bat, the 2017 Rawlings Quatro may be the ideal item for your needs. This bat has been constructed to address the needs of a wide array of baseball players (click here to see Best BBCOR Bats of 2017). Versatile and well-made, Quatro has quickly gained fans since its release in August 2016. Read the full review.

The Rawlings Velo is probably one of the most loved and versatile bats by Rawlings. Recently, the company launched the 2017 edition of its highly successful bat. Several characteristics make the 2017 Velo better than its predecessors. Let’s find out what this BBCOR-certified bat has to offer Read the full review.

For 2017, the DeMarini Voodoo Raw is our go-to choice for this category.

The Voodoo Raw is one of the best sticks in the market right now. Its ability to produce high amounts of power is uncanny and for that reason it’s shown a very strong showing this year.

It has an alloy barrel and an end-load which means this bat creates enormous power at the plate but it also comes game-ready without the need for a break-in period.

This bat was a strong contender for both the best power hitting bat and the best overall bat, that goes to show it’s a very well-rounded bat.

We’d argue this is a power-hitter friendly stick because it does have an end-load, but if you want, literally, the best bang for your buck – this is it. Hands down.