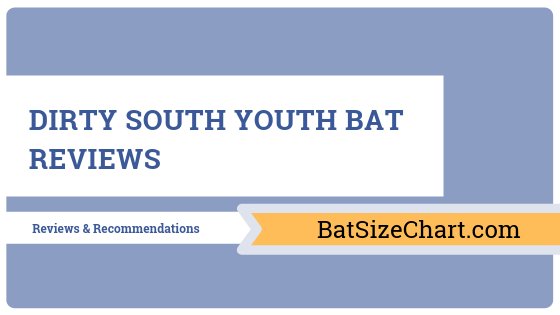 Dirty South Bats is bat company based in Atlanta, Georgia. They have delivered remarkable results from gorilla & grass roots marketing via facebook and other social channels. Many users of the bats swear by them. Others are surprised by their hype when the bats just alright. The positives focus on the bats barrel size and perceived pop, the negatives focus on the fact they are overpriced and ring hands on mishits.

Dirty South Bats controls most of their distribution internally. That is, they only sell them on their site. Just Bats picked up the bats for a few months, still has some, but doesn’t have a very large quantity or selection. The actual best place to buy the bats is on eBay used. You’ll need to be diligent as the selection isn’t huge. But, you can find them used, new in wrapper and “refurbished” (whatever that means).

To date, DSB only produces bats in the youth bat and fastpitch bat space. The youth space includes bats in the USA Bat space as well as the USSSA 1.15 BPF.

Dirty South doesn’t use the year nomenclature that most bat companies do. This is a common practice for smaller companies not willing to commit to an annual release. However, DSB does release a new bat every few months. These are almost always spruced up images on three main ideas:

Dirty South started in the business mimicking Combat. The Combat MAXUM, a huge barreled single piece composite bat, was all the rage in circa 2016 when the barrel size truly dwarfed any other bat out there. The idea was that a bigger barrel profile was the main differentiation between any bat. If the standard (1.15bpf) was the same then the only thing the industry could make better was a can’t miss barrel, right?

The idea fizzled when Combat, the company, got scrapped in a parent company bankruptcy. But Dirty South was there to pick up the hype and run with it. Many parents and players in the market for the biggest barrel undoubtedly came across the Dirty South literature and marketing plants on facebook and the internets. The single piece composites of the early days hit the ball well. And the rest is history.

The idea that a bigger barrel profile is always better is far from settled. But, DSB continues to make some of the biggest barrels on the market. (The biggest, actually, is Mizuno’s Ghost). Their mainstay is still the single piece composite.

In the latest iteration, they use a “continuous fiber” in their barrels—which is exactly what the Combat MAXUM claimed to used in their last iteration before going chapter 11. (Easton picked up Combat bats name an inventory).

DSB appears to be thriving in the industry. They benefited from the vacuum created the Combat dismissal. After a meteoric rise their market share appears to be leveling off.

The bats perform well. And those looking for a single piece composite with a huge barrel will find themselves wondering if they should send their money to someone besides Amazon or eBay or one of the big vendors or manufacturers. You wouldn’t be the first to do so. Strong and elite hitters like the big barrels and stiff feel. They will like the drop 5’s and 8’s more than the drop 10.

Smaller or average sized hitters tend to prefer two piece bats. At the kind of price point DSB is asking for their bats most smaller hitters will have better success with a highly rated two piece composite bat.

At the time of this writing here are the single piece composite bats produced by Dirty South Bats: