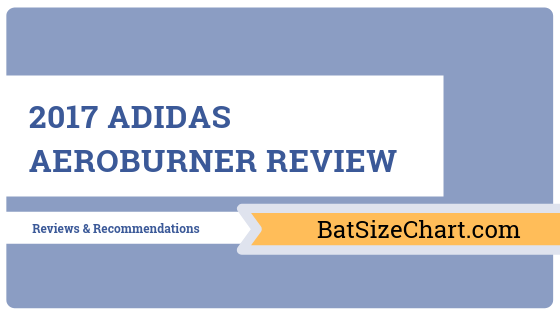 Most people hear “Adidas” and instantly think of shoes and clothing made of great quality. This is true, however, Adidas is also a top leader in sporting goods for baseball, football, softball, soccer, volleyball, basketball, and various other sports. Adidas supplies a wide variance of shoes, clothing, and sporting goods in a wide array of styles and colors.

Some of you may have heard of the 2017 Adidas Aeroburner in the sports news in reference with the Miami Hurricanes. This baseball bat was released in the summer of 2016 and has been in the headlines quite a bit. Adidas named the baseball bat, “Adidas Aeroburner” like they did with their “Adidas RBZ”. Both baseball bats were given a taylor-made “club line name”; which is owned by Adidas as well. The Adidas RBZ had been released by the company the year before.

Almost the only place to get a good deal on the Adidas Aero Burner bat is on eBay. We looked on several major manufacturer sites and found they lacked the sizing if not just flat out inventory. But, as always, eBay pricing is great on new and used bats.

With the 2017 Adidas Aeroburner being utilized by the Miami Hurricanes, a few things can be said about this baseball bat. The Adidas Aeroburner is a BBCOR space baseball bat (check out top BBCOR Bats here). It is manufactured as a one-piece, aluminum alloy bat that gives off a great sound when the player makes contact with the baseball. One of the highest reviews a baseball bat can receive is being used on a regular basis by a great team such as the Miami Hurricanes. The baseball players love to use it as well, as no player has said differently and there have been no issues with the players stating another baseball bat could have improved their game stats either.

Noticeable in the sports news also is the lack of other major collegiate sports teams not having their new 2017 sports gear being used as Adidas does. Slugger, DeMarini, and Easton seem to be either behind schedule with getting these baseball bats out into the league. This gives Adidas an advantage above the rest and also shows that the method of their strategies are more dominant. They are trying to make sure they are known in both the composite bats and the aluminum bats line up for 2017. The only other company to bring out any 2017 products to be used by the collegiate sports team is Rawlings. They have made their Quarto BBCOR available to only a select few hitters. This baseball bat will hit the market in the fall.

The Adidas EQT X1 baseball bat was never manufactured for big barrel, senior league, or youth space. So far, the Adidas Aeroburner has not manufactured these either, however, with the USA Bats Standard being modified in January 2018, it is more likely that Adidas will definitely not be bringing out a Aeroburner for use by younger athletes as it would only be of use legally for one year.

The engineers for the baseball bats at Adidas have come up with all new tailor-made technology for the AeroBurner. The 2017 Adidas AeroBurner provides us with a bat that has a decreased MOI, a perfect weight distribution, and increases the speed of the swing while allowing complete control. The lightweight, Texin end-cap is what assists this bat in allowing the increases of the speed of the swing, while at the same time is manufactured with a unique, extremely thin design that helps extend the “sweet spot” for an increase in power. The “sweet spot” is maximized by the manufacturing of an extended barrel. EQT grip tape is manufactured to assist in enhancing complete control of the bat during the swing.

The 2017 Adidas AeroBurner is available in four different sizes, along with the following baseball bat specifications.

As mentioned above, the 2017 Adidas Aeroburner is a balanced, BBCOR certified, aluminum, one-piece baseball bat that comes equipped with the EQT grip tape for total control over your swing (click here to see Best BBCOR Bats of 2017). This adult bat has a drop of -3 and a 2 5/8” barrel. Adidas even goes as far as to include a full one year warranty on this advanced baseball bat.

The Four Sizes Of The 2017 Adidas AeroBurner

As I mentioned above, the 2017 Adidas AeroBurner comes with a full one year manufacturer’s warranty. Depending upon where you have purchased your bat, you cannot contact Adidas for a refund if you are one of the few people who do not love their new bat. You will need to go through who you bought your bat in order to get a refund. If you have a defect or something along that line; yes, please contact Adidas to get your bat taken care of.

Please keep in mind that wooden baseball bats do not come with any warranties, however, this doesn’t apply to this certain baseball bat.